TIGERMAN IN “THE SIGNAL NEWS” 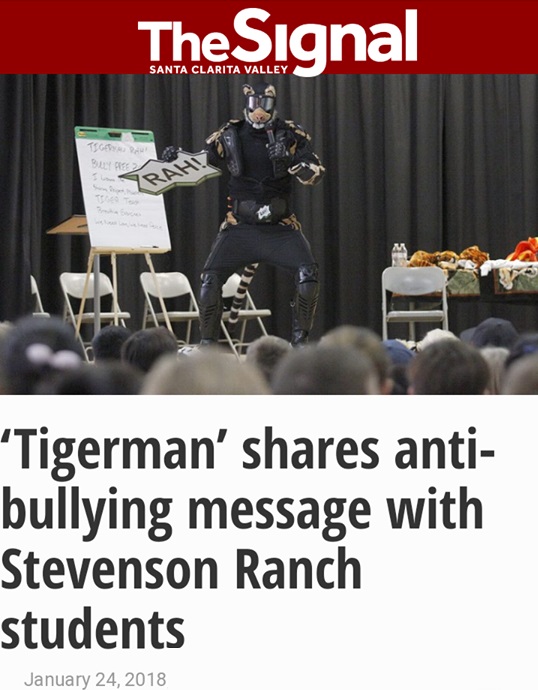 The multipurpose room of Stevenson Ranch Elementary School erupted in cheers Wednesday afternoon as Tigerman, the nonviolent superhero, appeared on stage to share his anti-bullying message with the school’s 800 students. “My motto is RAH!” Tigerman told the crowd. “It stands for Reject All Hate.”

Tigerman’s mission began decades ago when Mark Ciarlante created the superhero to deal with his own bullies in elementary school, who teased him because he liked to dance and perform. “I created Tigerman when I was little, when I was 5 years old, because I was bullied,” Ciarlante said. “I wanted to create a superhero that was not violent to be there for kids to teach love, peace, kindness and friendship.”Eighteen years ago Ciarlante formed the nonprofit Tigerman Campaign and created his Tigerman costume—complete with a tiger cape, mask and face paint—in order to empower children to be healthy and seek non-violent means of conflict resolution. Read More

“I started out with bully prevention, I saw the need in the late-90s kids were missing consequences and courtesy was disappearing,” Ciarlante said. His program has reached more than 2 million children nationwide and has now grown to include 15 subjects, like animal safety, recycling and reading. At Stevenson Ranch Elementary, the program included lessons on bullying prevention, manners, sharing, respect and relaxation techniques. “It would be amazing for them to have a clearer understanding of what bullying is and have life skills to address it,” fifth grade teacher Gail Orsinelli said.
“We’re working on a joint venture since we both have anti-bullying programs,” Jones said. “He does the frontend performance for the kids and I come and do the teacher training and parent training, and work with the kids when we’ve identified the different issues with counseling, classroom interventions and things like that.”

The duo is also working on an outcome study about the effectiveness of the program and its message through teacher surveys that are completed before the performance and weeks after it. “We’re going to take that data to help improve and create the program to build it up so we can figure out what the specific needs of the school are,” Jones said. “That way we’re not just coming in and doing a show and then leaving, but there’s going to be follow-up with the school and more support for kids, parents and staff on the backend.” Ciarlante knows firsthand how effective the program can be for children of all ages to learn about love, respect and kindness. “I’ve been doing it for 18 years, the first set of kids are in their 20s and they’re writing to me and emailing me and telling me that I saved their life,” he said. “And now they are teaching their kids what I taught them.”